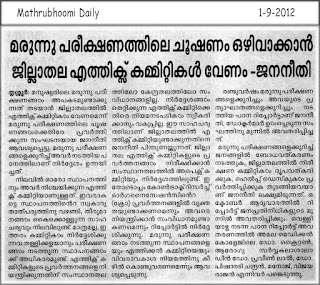 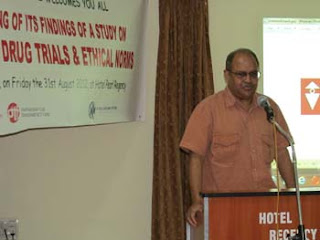 Posted by Jananeethi - Save Clinical Drug Trial Ethically Sound and Corruption-free at 20:39 No comments: 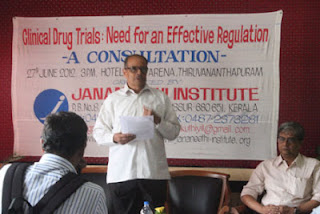 Report
The conduction of clinical drug trials in India poses many challenges. Many pharmaceutical companies outsource their drug trials to India because of lower cost, large population in combination with poverty and numerous diseases along with weak legal mechanism to curb the unethical trials. As the medical research world becomes increasingly globalised, there is a need to make research methodologically valid, and to observe the highest standard of ethics. An increasing number of pharmaceutical companies started outsourcing drug trials to Contract Research Organizations (CROs) in developing countries; these now make up a specialized global industry focusing on research on human participants. Currently the infrastructure for regulation, ethics review and monitoring is insufficient to regulate clinical trials in the country. While conducting the study on clinical drug trials in Kerala, Jananeethi Institute found that the mandatory norms and best practices in clinical drug trials were rampantly violated.  Several critical findings and observations emerged from this interventional study mandates for a strong campaign in order to combat unethical practices in the existing drug trial system. Recognizing the urgent need for furthering transparency in trials, protection of participant’s rights, and implementation of the good clinical practices, a State level Consultation was organized on 27th June, 2012 at Hotel Ruby Arena near Medical College Thiruvanathapuram.
The consultation began at 3.PM. Adv.George Pulikuthiyil; Executive Director of Jananeethi extended a warm welcome to the dignitaries and audience. He explained the core objective of the consultation. Eminent Jurist and Professor of Law, Padmashree Dr.N.R.Madhava Menon inaugurated the consultation. In his inaugural address he mooted for a state level mechanism to monitor the drug trials in order to ensure that the rights of the participants undergoing clinical drug trials are protected. It was followed by a short presentation by Adv. P.Sunilkumar of Jananeethi Institute sharing the key findings of the study. Dr.V.Mohanan Nair, formerly Deputy Director, Health and internationally acclaimed scholar on the Ethical Standards of clinical drug trials delivered the key note address. He explained the key features of the Indian regulatory framework on drug trials and insisted for its effective implementation sighting different ways of unethical practices happening during drug trials.  The consultation was attended by nearly thirty participants who mainly comprised of doctors, ethics committee members, legal experts, media persons and human right activists. There was active discussion from the floor and participants assured their cooperation and support for future initiatives. Consultation was presided and moderated by Dr V.Ramankutty, Professor, Achutha Menon Centre for Health Sciences, Medical College Thiruvanathapuram. He summarized the key points of the consultation and solicited support from the fraternity to bring significant changes in the drug trial system based on the findings of the consultation.
Posted by Jananeethi - Save Clinical Drug Trial Ethically Sound and Corruption-free at 01:01 No comments: